The 2019 Genesis G70 has now become a vehicle that can be best described as a performance bargain. The reason is its improved driving dynamics that has now thrown a tougher challenge to its closest

The 2019 Genesis G70 has now become a vehicle that can be best described as a performance bargain. The reason is its improved driving dynamics that has now thrown a tougher challenge to its closest rivals.

The 2019 Genesis G70 as a premium luxury compact sedan has now placed the name of Hyundai Genesis in the same row of Mercedes Benz, Audi and BMW. With the success of the 2019 edition of G70, Genesis hasn’t only sent a message to the prospective buyers that they too have the right to enjoy premium luxuries at an affordable price, but also thrown an open challenge to the first row luxury brands, the models of whom were so long enjoyed by the privileged few.

After this much of market commotion, the 2019 Genesis G70 raised a lot of curiosity among people who wanted to test its capabilities on the road, after Genesis has announced its improved performance mechanisms. Dealerships like Riverside Genesis, started accumulating regular crowd for the 2019 G70 and the sales record shows a busy note.

Genesis has installed within the 2019 G70 a2.0-liter turbo-4 engine that is capable of making a 252-iof horsepower and has also included in the lineup a 365-hp generating 3.3-liter turbocharged V-6 engine for the more spirited drivers paired toeither an 8-speed automatic with paddle shifters or to a 6-speed manual transmission. 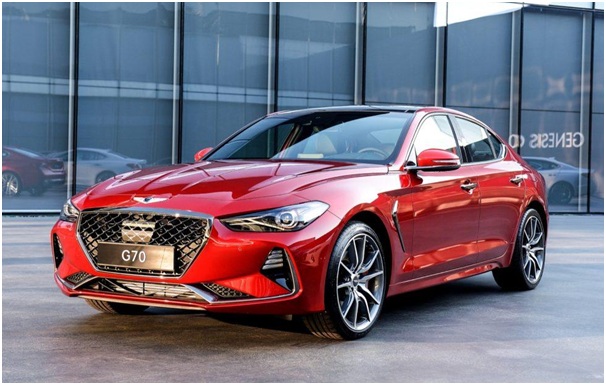 The 2019 model year of Genesis G70 is constituent of 2.0T and 3.3T models that are furthered distributed in trims like Advanced, Elite, Prestige, Dynamic, and Sport. If you are eyeing on the 6-speed manual gearbox, choosing only the 2.0-liter turbo-4 engine can get you one.

The3.3-liter V-6 engine that comes standard with an 8-speed with paddle shifting transmission. Both the engine can be configured as all-wheel drive with a Launch control feature.

The road test results counted the 2019 Genesis G70 raising a speed of 60 mph from a dead stop in about 6.5 seconds when driven with the turbo-4 engine, while the V-6 options brought down to 4.5 seconds.

All V-6 versions of the 2019 Genesis G70especially the 2.0T Sport trim are given the advantage of a limited-slip differential in order to achieve better control on the vehicle in the events of cornering and facing hairpin turns, while the mechanisms of an uprated Brembo is made available to make the stopsshorter after applying the brakes. All the 2019 G70 models are also given a pair of front struts in tune with a rear multi-link suspension that are tuned up to make a canyon performance score.The existing powertrain options earned the 2019 Genesis G70 a decent EPA rating that counts it’s fuel economy as 25 mpg in a combined trip, when the G70 model fits under its hood the turbo-4 engine, and the count comes down to 20-21 mpg when you drive with the V-6 engine.