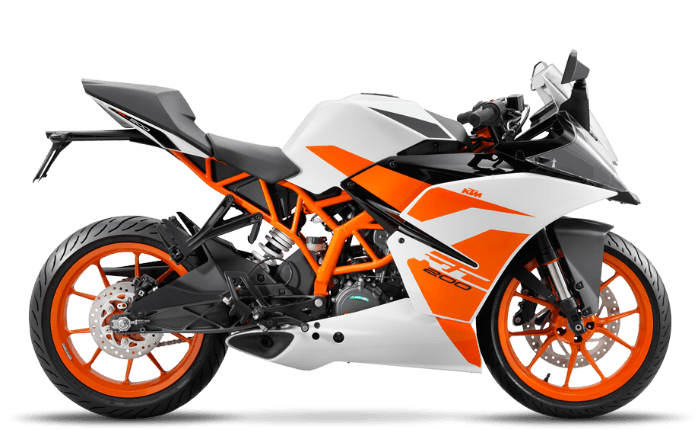 Race Competition! The phrase that best describes the Austrian-bikemaker’s range of motorcycles in a nutshell. The RC in the moniker, after all, is an acronym to Race Competition. Boring facts aside, the KTM RC 200

Race Competition! The phrase that best describes the Austrian-bikemaker’s range of motorcycles in a nutshell. The RC in the moniker, after all, is an acronym to Race Competition. Boring facts aside, the KTM RC 200 is sufficed as something you would take to a track, have a few laps with, and end up with a stupid grin plastered to your face.

You see, even though it’s been on sale for a few years now, the KTM looks as sharp and intimidating as it when it first broke cover. The front is still dominated by a dual-pod projector setup and a beak that houses twin LED DRLs. The full-fairing looks commendable and the clip-on handlebars suggest that this is a sporty offering. The tail sweeps up nicely towards the end giving the bike charm purists will drool over.

Even though the design hasn’t changed over the years, KTM has regularly updated the livery of its motorcycle, making it look like a fresh motorcycle. And dare I say, that it doesn’t. Read more below.

Powering the KTM RC 200 is a 199.5cc single-cylinder liquid-cooled, which is compliant with BS-IV emission norms as of early-2020. It is capable of churning out 25.1bhp of power and 19Nm of torque. Further, the power is sent to the rear wheel via a six-speed gearbox.It is a free-revving motor and while it does not have much in the lower end of the rev band, the mid-range and top-end are meaty and somewhat intimidating.

The KTM RC 200 is a beautiful super sport motorcycle. The design is well-balanced and outright sporty, something that is sure to lure the boy racers. Dimension-wise, the bike is 1,978mm in overall length, 688mm in overall width, and 1,098mm in overall height. It has a kerb weight of 147kg and a ground clearance of 157mm.

Since it is a KTM RC motorcycle, the RC 200 is expected to deliver nice and taut handling. And yes, it does. The riding position is a bit too committed though, making it difficult to ride this motorcycle for longer durations. The bike is built around a trellis frame. It rides on upside-down forks at the front and a monoshock at the rear. The 17-inch wheels are shod with a 110/70 R17 tyre at the front and a 150/60 R17 tyre at the back. For braking, the bike comes equipped with disc brakes on both ends, a 300mm unit at the front and a 230mm unit at the rear.

Recently, KTM upgraded the RC 200 to meet the new safety norms. As a result, it now comes with single-channel ABS as standard. The instrumentation is held by a fully-digital cluster that is capable of showing a variety of useful information. As for lighting, the projector lenses at the front are powered with halogens while the taillamp is an LED.

The KTM RC 200, as of 2020, is available in two shades: Black and White. While the Black surely looks stealthy, the White looks the most exuberant and appealing.

For all that and more, be sure to tune in to autoX.